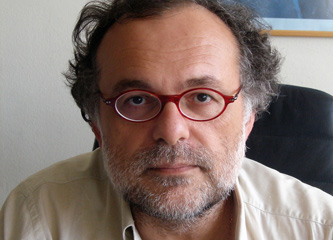 He studied Mathematics to Aristotelio University of Thessaloniki from 1976 to 1980.

He is working professionally as a journalist since 1987.

He has worked at «Rizospastis», «Kathimerini», «ET-3», «Macedonian Press Agency», «Radio Paratiritis», «Radio FM100». He was responsible for publishing of bilingual (greek and english) magazine «Balkan Review» which was published from Balkan Press Center from 1994 to 2000.

He was elected member of Parliament representing Pella Prefecture on the elections in June 1989, November 1989 and April 1990. He was elected district councilor of Pella in 1994 and 1998.

He is married and is the father of a 30 years old daughter.