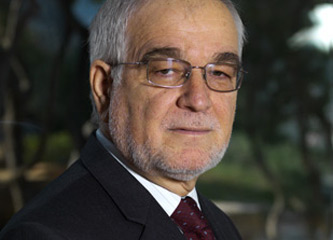 Mr. Koutsianas was born in 1946 in the village Gavrakia in Fthiotida.

He studied Pharmaceutics in Athens University, Business Administration in Athens Economic University and for many years he participated in many seminars on Marketing and Management in Greece and in other countries.

The business activities of Mr. and Mrs. Koutsiana began in their pharmacy in Agia Sofia square in Psychico. In the lab of their pharmacy, Mr. Koutsianas applied phytotherapy, aromatherapy and homeopathy, by creating mixtures made of several herbs for various pharmaceutical uses, such as the creation of natural cosmetics.

Some years later, in 1979, together with his wife Niki, they created the company APIVITA (from the words “apis” = bee and “vita” = life), drawing their inspirations from the self-sufficient society of the bee and its beneficial products, from the Greek Flora, according to Hippocrates holistic approach in beauty.

Mr. Koutsianas was President of the Board of the Hellenic Cosmetics Toiletry and Perfumery Association until February 2005, having been elected 4 consecutive times. Also, he is a founding member of the Greek Ethnopharmacology Society, of the Greek Cosmetology Society and was also General Secretary of the Pharmaceutical Association of Attica and Member of the Board of the Panhellenic Pharmaceutical Association.

In 2015 he founded APIGEA, a company inspired by Hippocrates’ holistic approach to health (mind/body/soul), by the self-ruled bee society and by the unique Greek flora. Its mission is to offer innovative and organic beekeeping & medicinal and aromatic plants’ (MAP) products of high quality, knowledge/education and services and to build a sustainable knowledge economy of Greek organic beekeeping and MAP farming community.

In 2006 he was awarded as “Self-made Businessman” in the Entepreneur of the Year contest, held by Ernst & Young.

In 2006 he was awarded with the Oicopolis award for APIVITA’s contribution in sustainable development.

In 2008 he was awarded by the Hellenic Federation of Enterprises and Bill Gates for APIVITA’s Innovative Business Model.

In 2017 he was awarded with the Excellence award in Entrepreneurship by the Athens University of Economics and Business in recognition of his long and important business activity.