Deputy Minister of Economy and Development of the Hellenic Republic 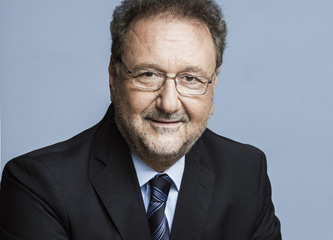 Deputy Minister of Economy and Development of the Hellenic Republic

Stergios Pitsiorlas was born in Thessaloniki in 1955. He is a graduate of the faculty of Law of the Aristotle University of Thessaloniki. He was appointed as the Chairman of the Board of Hellenic Republic Asset Development Fund (HRADF) in March 2015 and resigned on November 2016 after assuming the position of Deputy Minister of Economy and Development.

Mr Pitsiorlas worked as a lawyer between 1982 and 2004, while he worked as an expert consultant on the evaluation of the Integrated Mediterranean Programs (Eastern and Central Greece) between 1991-1993. Since 2010, he is working in the Renewable Energy Sources sector (Member of the Board of “Maurovouni Wind Farm S.A.” and Chairman of “Zaraka Koupia S.A.”). He was the Chairman of the construction company “Stroicentre Real Estate S.A.” between 2011 and 2014. He has been the Chairman of “Med Sea Health S.A.” and “Mare Village S.A.” since 2008 (design and implementation of tourism investment project in Kassandra, Chalkidiki).

Equally rich is his political and social action. At age 17 he joined the anti-dictatorship organization “Rigas Ferreos” and from 1975 to 1979 he was Secretary of the youth organization of “Rigas Ferreos” in Thessaloniki. Between 1982 and 1987 he was a member of the Central Commission and the Executive Office of KKEsoterikou, Secretary of the organization of KKEsoterikou in Thessaloniki. During 1985-1991 he was a member of the Executive Board of the EAR (Greek Left Renewal), and in particular since 1989 was a member of the Executive Secretariat of the party SYNASPISMOS (Coalition of Left). From 1996 to 2004, he had the position of Coordinator of the Central Committee and the Political Secretariat of the SYNASPISMOS (Coalition of Left and Progress).

He is married, with one child.