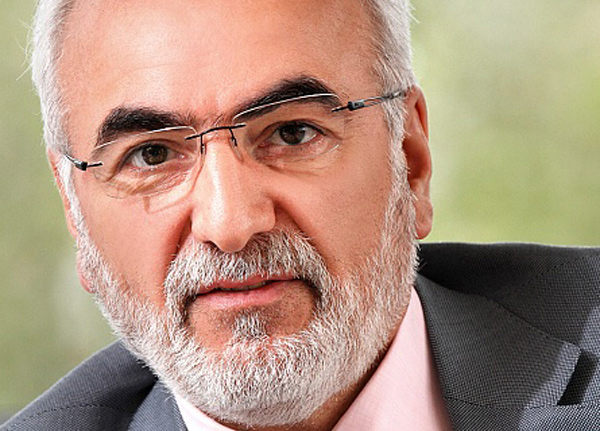 Public person, Member of the Presidential Council of International Relations, President of the National Cultural Autonomy of Greeks in Russia, Coordinator of the World Council of Hellenes Abroad (SAE) of the countries of the Former Soviet Union, Founder and Chairman of the Board of Directors of  «Agrocom Group» Holding Company, an outstanding philanthropist.

Ivan Savvidi, Greek by birth, was born on 27th of March 1959 in the Greek settlement of Georgian Soviet Socialist Republic, eighth child in a family of worker.

After finishing secondary school in the Rostov region, he went to serve in Soviet Army, and quit the army in the rank of sergeant major.

In1980 he came to the Rostov Tobacco Factory.

In 1988 Ivan Savvidi graduated from the logistic faculty of Rostov State University of Economics.

In 1993 he was elected as a General Director of the Company «Donskoy Tabak».

In 1998 Ivan Savvidi started his political path, and up to 2003 was Member of Legislative Assembly of the Rostov region. In December 2003 Ivan Savvidi was elected as the State Duma Member of 4th convocation. Since April 2004 he was the Vice-chairman of Budget and Taxation Committee.

In April 2007 Ivan Savvidi was reelected in Russian Federation State Duma, where he was a Member of Committee of International Affairs and Coordinator of Interparliamentary Deputy Group by Relations with Parliament of Greek Republic, Vice-chairman of the Commission of Parliament Assembly Of Russia and Belorussia Union by External Politics, member of PACE.

Since 2012 Ivan Savvidi holds the position of the Chairman of the Board of Directors of the «Agrocom Group» Holding Company, founded in 2004.

Ivan Savvidi is engaged in social activities, holds the position of the president of the National Cultural Autonomy of Russian Greeks, Coordinator of the World Council of Hellenes Abroad (SAE) of the countries of the Former Soviet Union. Since 2012 he is a Member of the Presidential Council of International Relations.

In 2013 he was awarded the status of the Honourable citizen of Greece for his special role and contribution into development of relations between Russia and Greece, merits to Greek nation, Greek republic, world Orthodoxy, public and philanthropic activities.

Ivan Savvidi’s achievements in public, social and economic activities and his contribution to social and economic development of Russia were honored by several national awards such as Medal of the Order of Merit for the Motherland, Medal of Honor, awards of Russian Orthodox Church, Presidential letters of gratitude etc.

Ivan Savvidi is a candidate of economic science, has several works on logistic and marketing. Married, has two sons.