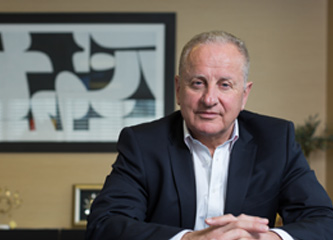 He is a Chemical Engineer and holds a Master’s degree in Advanced Integrated Design from the Houldsworth School of Applied Sciences, University of Leeds in the UK, from where he graduated with distinction. He has an extensive professional experience in the oil industry and has worked in various companies both in Greece and abroad.
Since 1984 he has undertaken various managerial positions in the Hellenic Petroleum Group, in different areas. He participated in the Aspropyrgos Refinery upgrade team during the period of 1984-1987, he was assigned several design and process activities, mainly specialized in process control and production optimization and during 2008-2014 he was the Project Coordinator of the Elefsina Refinery Upgrade.

He has published several technical articles on topics such as Process Control, Optimization and Advanced Control Systems. He is the author of the book under the title: “The Oil Market in Southeast Europe”, published by the Institute of Energy of South-East Europe and the Greek General Confederation of Labor. He has participated as a speaker in many conferences.
In May 2015, he was appointed CEO of Hellenic Petroleum S.A.

Since February 2017, he is a Councilor of the General Council of the Bank of Greece.

He speaks Greek, English and French.