Political correspondent in 24MEDIA and in MEGA CHANNEL 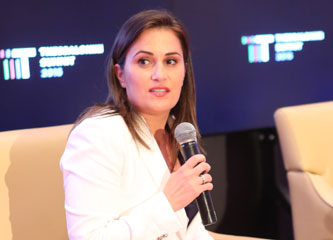 Political correspondent in 24MEDIA and in MEGA CHANNEL

She was the presenter of the defence news program (2017) in public television, which covers military matters.

For more than 20 years she has interviewed a wide number of political leaders and influential personalities and has covered in many parts of the world the life of Greek diaspora. She has coordinated a wide number of international conferences in Greece and abroad on foreign policy and diplomatic affairs. She has worked in REAL NEWS Sunday newspaper and she is a correspondent in Athens for Cyprus MEDIA organizations. She has also covered and broadcasted in the main news bulletin of MEGA CHANNEL the preparation of the Olympic Games in Athens from 2000-2004.

She holds a Master’s Degree in Media Studies and Marketing and on Energy Issues in the Eastern Mediterranean.