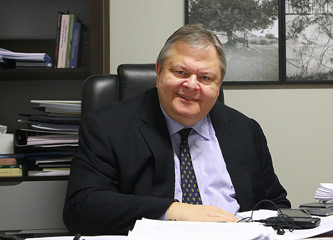 Evangelos Venizelos was born in Thessaloniki on 1.1.1957.

He is Professor of Constitutional Law at the Aristotle University of Thessaloniki.

He has published many academic studies and legal textbooks, as well as books dealing with the political issues surrounding the role of mass media in modern democracies, role of government institutions, European affairs, Greek foreign policy, culture and development policy in 21st Century, etc. His studies have been published in most academic journals and numerous articles in the national and, also, international press.

In 18.03.2012, he resigned from his government positions as he was elected President of PASOK.

From June 2013 to January 2015 he served as Minister of Foreign Affairs and Deputy Prime Minister.

Εvangelos Venizelos currently serves as MP for Thessaloniki A Constituency and Secretary of the Special Permanent Committee on Institutions and Transparency.

He is the Vice Chairperson of the Socialist Group of the Parliamentary Assembly of the Council of Europe.