Chairman of the Board of Directors, INTRASOFT International 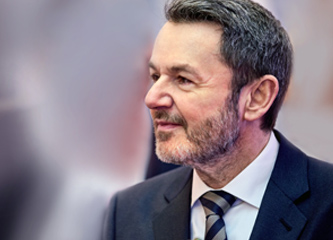 Chairman of the Board of Directors, INTRASOFT International

Mr. Athanasios Kotsis, since February 2015, has been elected Chairman of INTRASOFT International Group of Companies. INTRASOFT International is a Luxembourg based leading European IT Solutions and Services Group employing more than 1,600 highly-skilled professionals, operates branches, subsidiaries and offices in 18 countries. More than 500 organizations in over 70 countries worldwide have chosen the company’s services and solutions to fulfill their business needs.

Mr. Kotsis has been one of the founders of INTRASOFT International in 1996 in Luxembourg and has served as CEO of the Group from March 2006 to January 2015.

Before joining INTRASOFT S.A., Mr. Kotsis was employed (1991 – 1993) by INTRACOM S.A., in Athens Greece, and was responsible for organising and co-ordinating the company’s European activities and in particular for development programmes concerning the application of new IT technologies in e-Government solutions.

Between 1984 and 1988, Mr. Kotsis had a carrier as Software Engineer designing and developing application software.

Mr. Kotsis is the Secretary General of SEPE, the Federation of Hellenic ICT Enterprises and has been member of the executive board of Digital Europe (www.digitaleurope.org) between March 2011 and November 2012.

Mr. Kotsis holds a post graduate studies degree in Business Informatics from the Fredericiana Universitaet Karslruhe, Germany, and a B.Sc. degree in applied Mathematics from the Kapodistria University of Athens, Greece. Mr. Kotsis is fluent in English, German, French and Greek, and has a good knowledge of Dutch and Luxembourgish. Mr. Kotsis is married with two children and lives in Brussels Belgium.